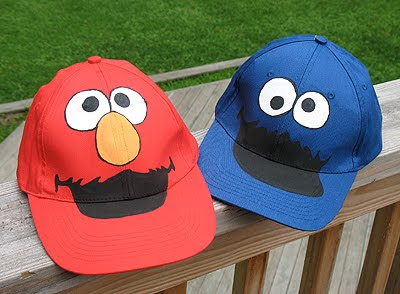 I have been meaning to make these for weeks. One of my boys had asked for a Cookie Monster hat for his birthday back at the beginning of June. I wasn’t able to get him one, but swore I would make one, eventually. When picking up the blue hat at the craft store, they had them on sale, 50% off. Originally they were $1.99, which is a steal in its own right, but with the discount now only $1.00, so I grabbed a red one too :) Oh and incidentally, Lids sells these Sesame Street hats for $25 ($12.99 at Amazon, go figure!), mine cost $1.00 each plus my time. 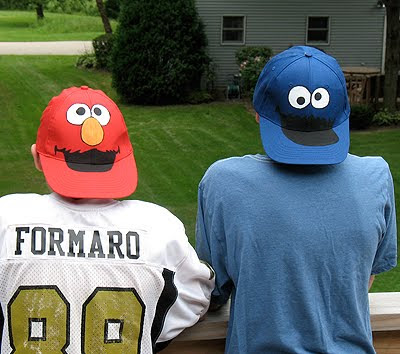 Oh, and in case you are wondering why you are seeing the back of my two boys instead of the front… the older one is now 13. See, his friends razzed him when they googled his name. Since I’ve been on the internet for such a long time, and because I’ve been making kid’s crafts equally as long and used to publish them on FamilyCorner.com (my old website) they found a picture… of him… and his brother… in a bubble bath. 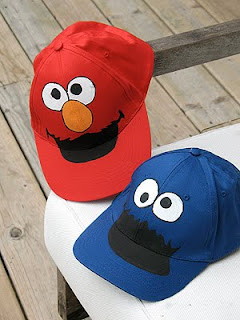 They were LITTLE! Jeez, only 2 and 3 years old at the time, the craft was a bubble frame (sure! go look, it’s cute! I’ll wait…). Ha ha! Took me forever to convince him to let me get a picture of him wearing the hat, and then he would only agree to the back. LMAO!

So back to the hats. :) I basically just found some images on google of Cookie Monster hats and Elmo hats (there are other Sesame Street characters too) and drew the pattern using the picture as a guide.

I did make my Cookie Monster mouth look a little different than the image. It would be fun to tell you I did that on purpose, but I didn’t. I just hosed it up. But it looks ok anyway. :)

See the picture I used showed the hat at angle, stupid, I know, instead of an overhead shot. So needless to say, it didn’t come out perfect, but I’m happy with them, and so are the boys.

Currently, both hats are in my daughter’s room. She stole them when the boys were at football practice.


Oh and one last note here, if you don’t have fabric paint, get yourself some textile medium. You mix it with your acrylic paints and you have instant fabric paint. :) 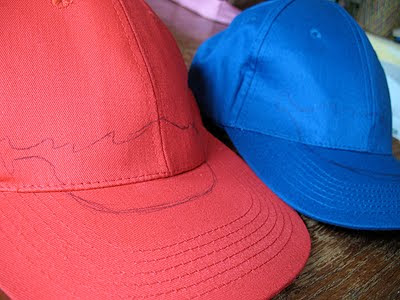 First I cut the mouth pattern out and placed it over the bill of the hat. I used a pen and traced around the pattern lightly. 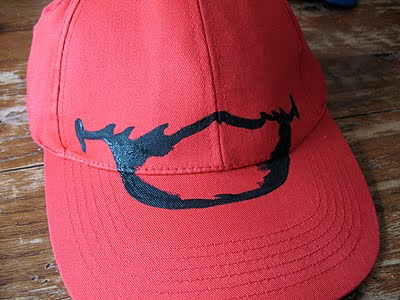 Then I used a liner brush with black paint to outline the mouth, then filled it all in with a thicker paintbrush. 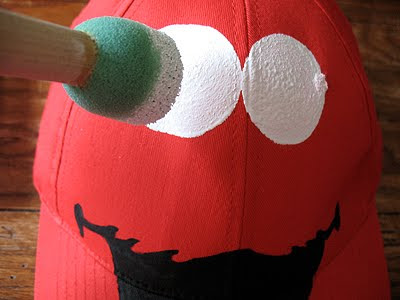 Next I used a round sponge applicator to add the eyes. I twirled and swirled and pressed the paint on, turning and swirling to make the circle larger. You have to let the white dry all the way before moving on.

I used the round applicator to add Elmo’s nose, a small round sponge applicator for the blacks of the eyes, and a liner brush to outline the eyes and nose. That was the hardest part. But you can touch up the mistakes with more paint. I did. :)

That’s it! Then just let them dry before you wear them! 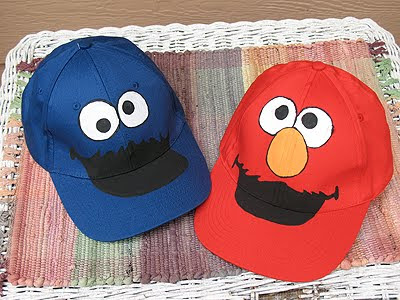 More cool stuff from the interwebs:
Crocheted Sesame Street Hats – from Girl in Air
Cookie Monster Hat – from Parking at Home
Elmo Hat pattern – from Because Mommy Said So

Amanda Formaro
Amanda Formaro is the crafty, entrepreneurial mother of four children. She loves to bake, cook, make kid's crafts and create decorative items for her home. She is a crafting expert and guru in the kitchen and has appeared online and in print publications many times over the years. She is also the editor for the Home & Garden channel at Craft Gossip and owner of FunFamilyCrafts.com.
Latest posts by Amanda Formaro (see all)
62shares 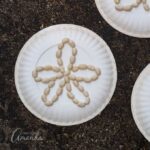 There's nothing like a fun beach craft! If ... END_OF_DOCUMENT_TOKEN_TO_BE_REPLACED 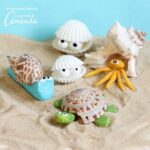 Have you ever wondered what to do with ... END_OF_DOCUMENT_TOKEN_TO_BE_REPLACED 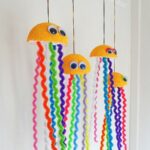 Need a fun project for a lazy afternoon? This ... END_OF_DOCUMENT_TOKEN_TO_BE_REPLACED 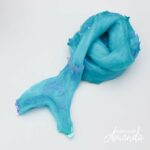 How to Make Mermaid Slime

Mermaids are so mystical and magical - it's ... END_OF_DOCUMENT_TOKEN_TO_BE_REPLACED 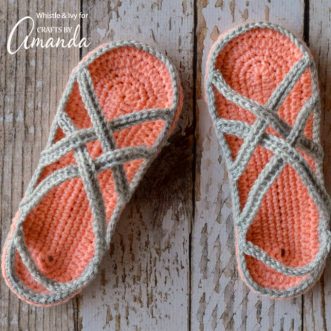 I'll show you how to make this beautiful ... END_OF_DOCUMENT_TOKEN_TO_BE_REPLACED

I originally made these epsom salt luminaries ... END_OF_DOCUMENT_TOKEN_TO_BE_REPLACED

Doilies are dainty, burlap and twine are ... END_OF_DOCUMENT_TOKEN_TO_BE_REPLACED

These colorful Halloween luminaries are made ... END_OF_DOCUMENT_TOKEN_TO_BE_REPLACED

Make pretty winter luminaries that appear to be covered ... END_OF_DOCUMENT_TOKEN_TO_BE_REPLACED

I love working with deco mesh. You can see evidence of ... END_OF_DOCUMENT_TOKEN_TO_BE_REPLACED

I'm going to show you how to make these adorable ... END_OF_DOCUMENT_TOKEN_TO_BE_REPLACED 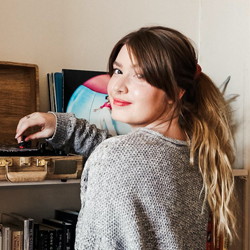