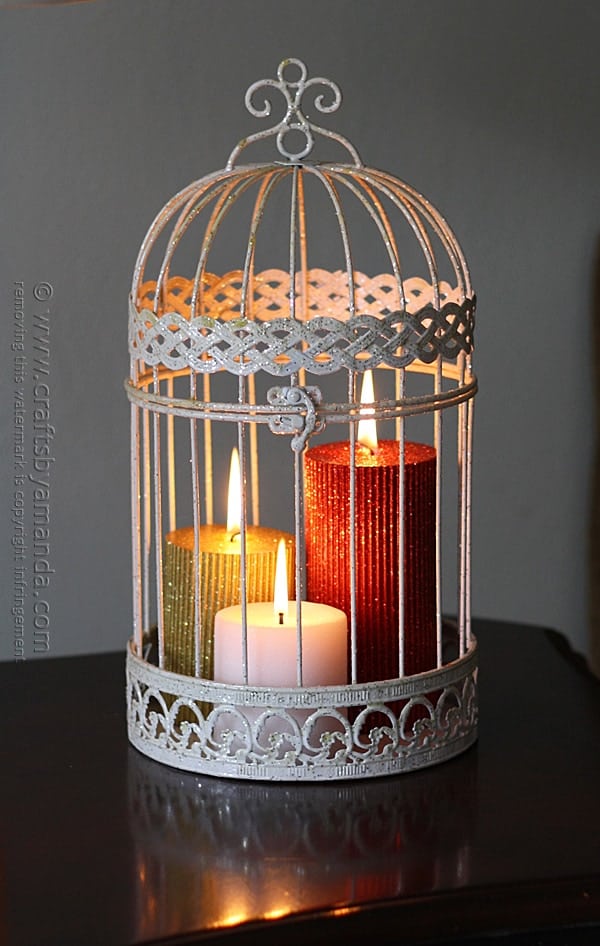 I was walking through Michaels a few weeks ago and saw these really pretty glitter pillar candles. Moments later I saw they had some bird cages on sale. Score! I knew exactly what I was going to do with them, but they didn’t have any white glitter candles. There was gold, red, and silver, but I really thought white would look better. So it was time for a quick project. 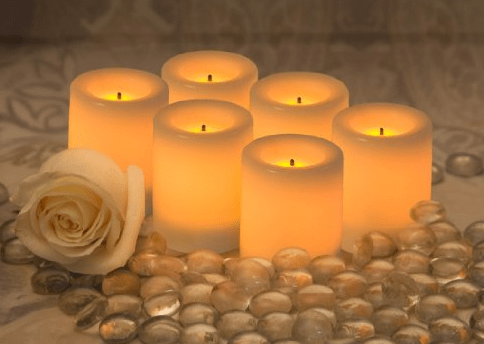 I’m going to start off by saying that I used real candles. Exercise caution. Keep them high enough that small children can’t reach them and don’t put them near something that could catch on fire. There are some questions and answers at the bottom of this post, but please, just use common sense and if you aren’t comfortable with lit candles, display them without lighting them. An alternative is to buy LED flameless candles (pictured above), which are available at Michaels and online at Amazon, here’s an example. 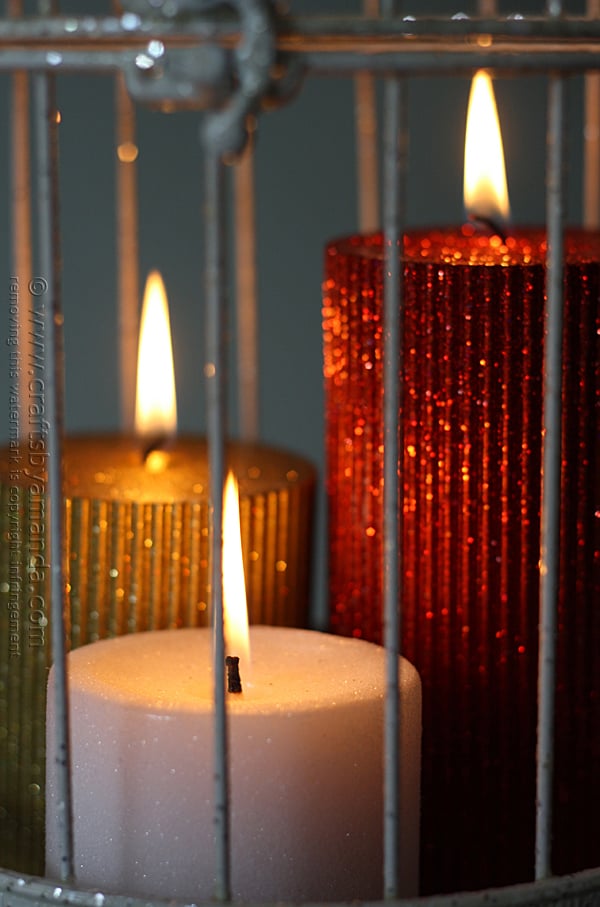 Back in September I spotted this cool bird cage set up on Country Living with candles in varying heights. I had shared it on my Facebook page (below) and have had it in the back of my mind ever since. On that Facebook post one of the CBA readers mentioned that Michaels had bird cages. So the moment I saw the candles I was on a mission to find the bird cages! 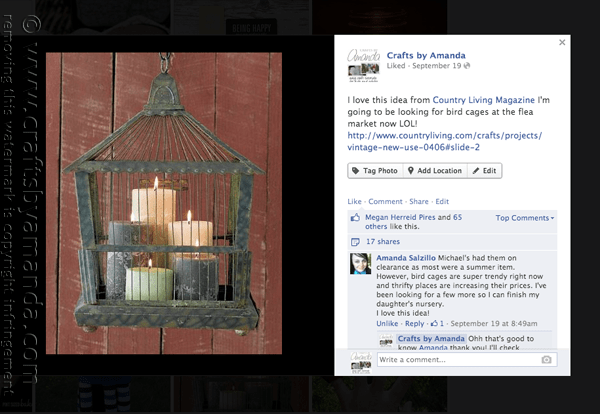 I found two that I liked, but the one from Country Living is considerably larger as you can see it holds about twice the candles mine does. I love the way mine turned out, I think it looks absolutely stunning! 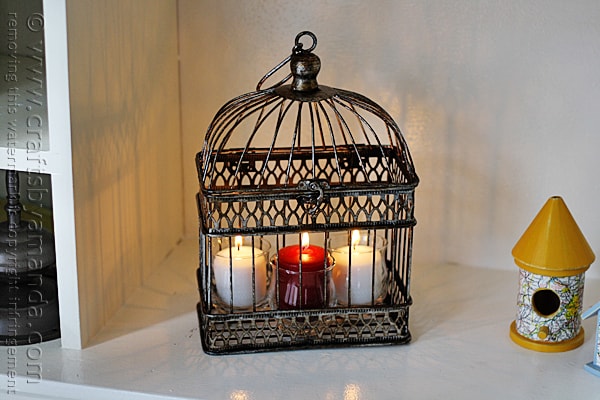 I’ve kind of been in the Christmas mood ever since late October when I participated in the Michaels Dream Tree Challenge with several other bloggers. You can see my tree here. They asked me to share a Christmas project, so when I found the candles and cages in the store I knew this would be the one I would share! 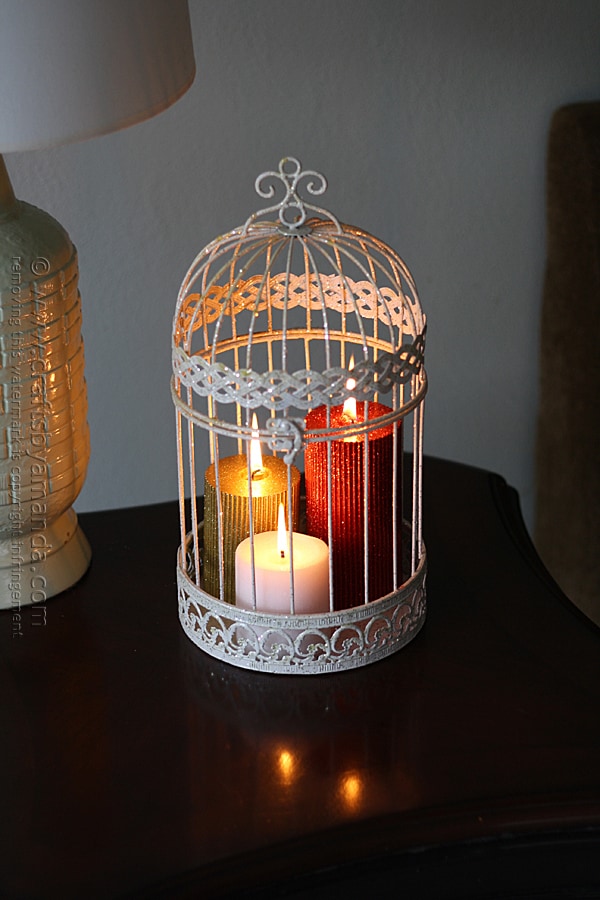 This is super simple and requires almost no crafting skills. Just find some bird cages and put candles inside. Simple! 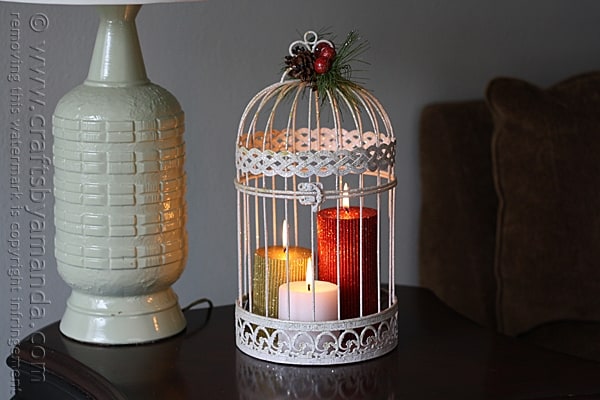 The white cage actually came with some fake greenery tied on top (see photo above). It didn’t take long for the flames from the candles to start melting the greenery. So that had to go! Again, if you use flameless candles this won’t be an issue. 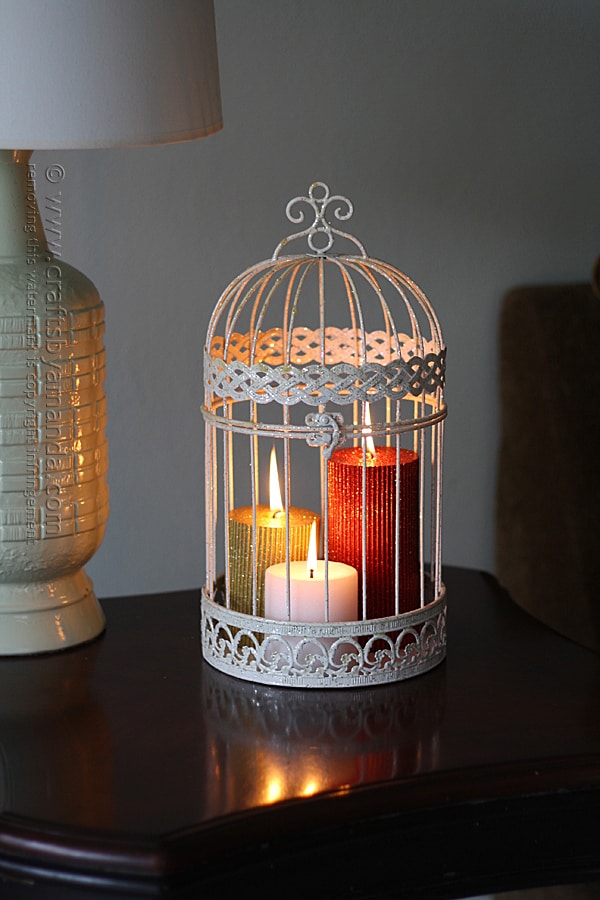 I’m glad I took it off as the top of the cage is quite pretty and ornate. 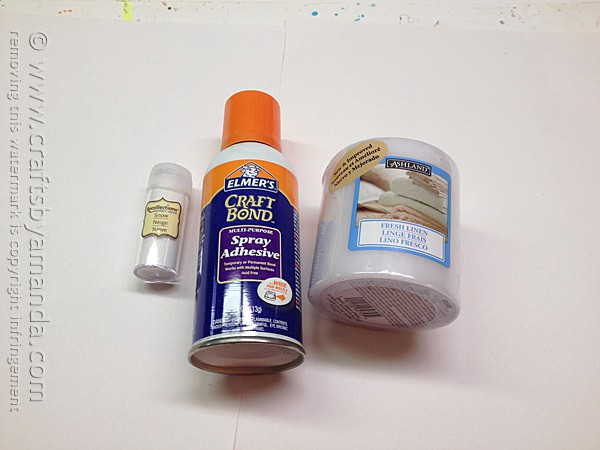 To glitter a candle is simple. You need adhesive spray and glitter. That’s it. You could probably use glue if applied thin, or Mod Podge, but I read on a few blogs that it was considerably messy. The adhesive spray works great. 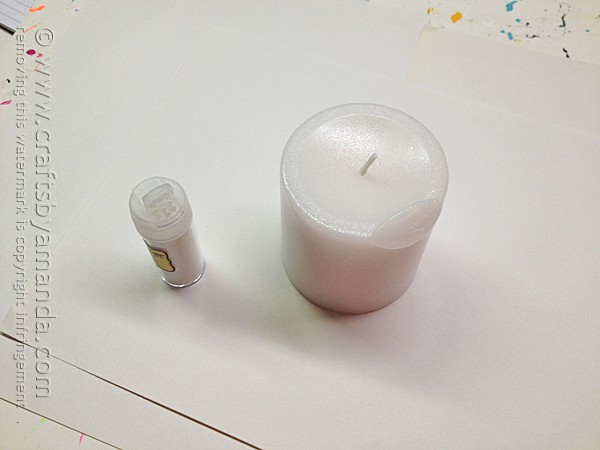 Just spray the outside of the candle and cover it in glitter. 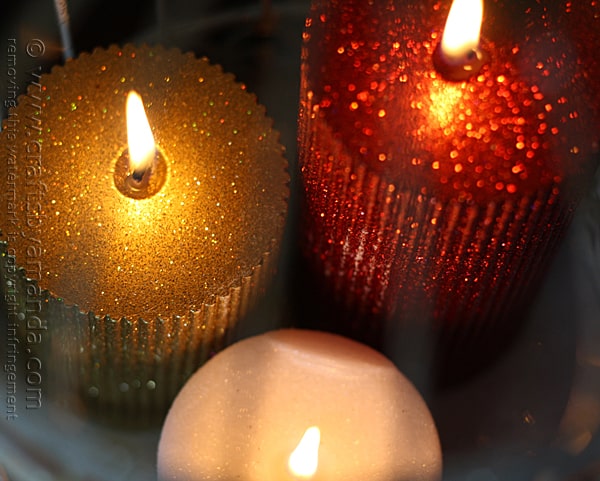 Two questions that will most likely be asked are:

1) Isn’t the spray adhesive flammable? Should I avoid spraying the wick?

A: The spray adhesive is flammable while being sprayed. Once you have sprayed your candle and applied the glitter it’s fine and no longer flammable. 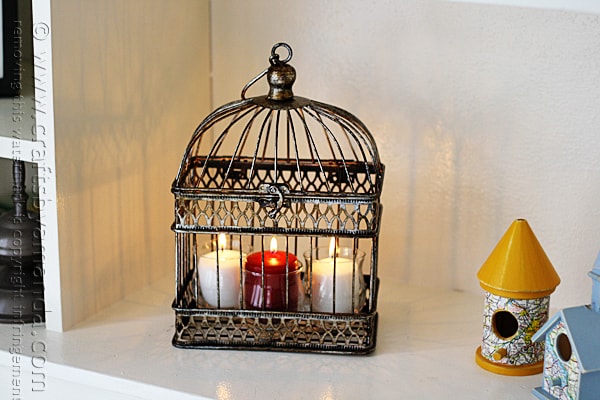 2) Does the glitter cause any problems with the candle burning?

A: I’ve had my candles burning for the last hour and there’s been no effect on the glitter or the flame. 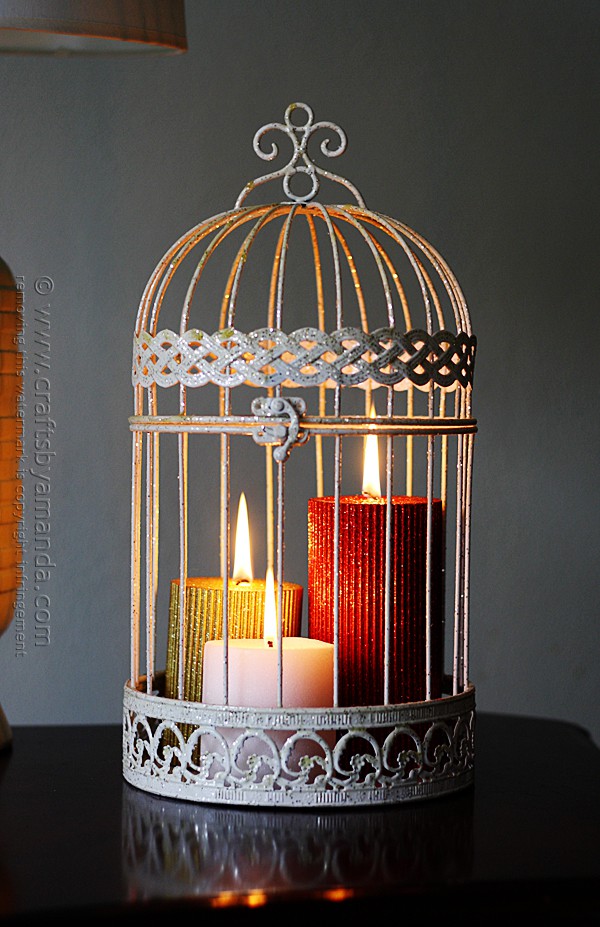 Something I DID notice is that after about an hour the very top of the inside of the bird cage was getting black. The flames on the candles were pretty tall as you can see from the pictures, so I trimmed the wicks and that seemed to help considerably. 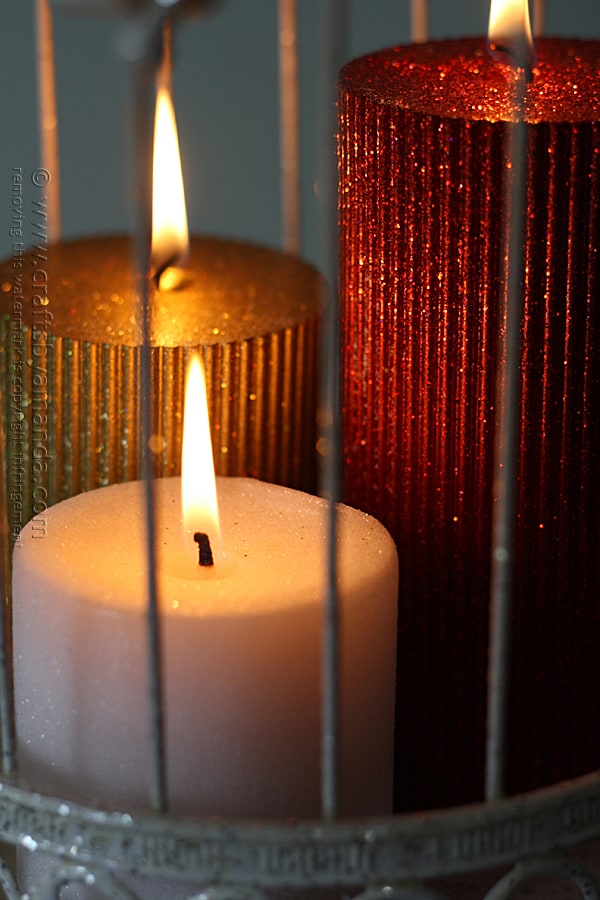 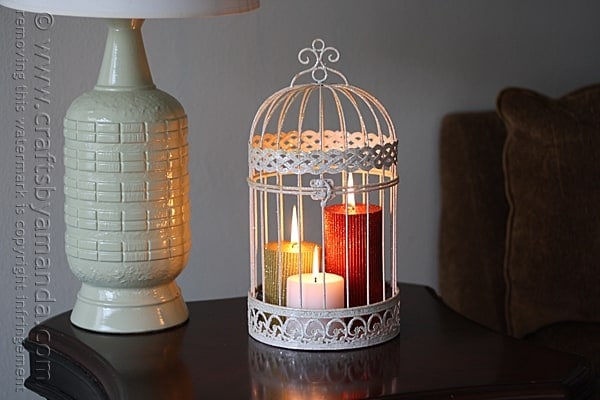 Amanda Formaro
Amanda Formaro is the crafty, entrepreneurial mother of four children. She loves to bake, cook, make kid's crafts and create decorative items for her home. She is a crafting expert and guru in the kitchen and has appeared online and in print publications many times over the years. She is also the editor for the Home & Garden channel at Craft Gossip and owner of FunFamilyCrafts.com.
Latest posts by Amanda Formaro (see all)
398 shares 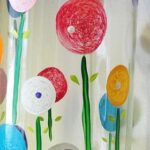 Spring is in the air, my tulips are coming up ... END_OF_DOCUMENT_TOKEN_TO_BE_REPLACED 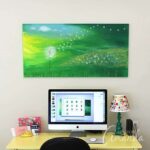 When I started working on my studio in March, ... END_OF_DOCUMENT_TOKEN_TO_BE_REPLACED 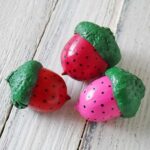 Acorns gather in the yard every year. Have ... END_OF_DOCUMENT_TOKEN_TO_BE_REPLACED 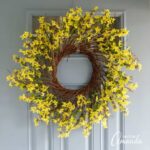 How to Make a Forsythia Wreath

Spring is being really stubborn in southern ... END_OF_DOCUMENT_TOKEN_TO_BE_REPLACED

I'll show you how to make this beautiful ... END_OF_DOCUMENT_TOKEN_TO_BE_REPLACED

I originally made these epsom salt luminaries ... END_OF_DOCUMENT_TOKEN_TO_BE_REPLACED

Doilies are dainty, burlap and twine are ... END_OF_DOCUMENT_TOKEN_TO_BE_REPLACED

These colorful Halloween luminaries are made ... END_OF_DOCUMENT_TOKEN_TO_BE_REPLACED

Make pretty winter luminaries that appear to be covered ... END_OF_DOCUMENT_TOKEN_TO_BE_REPLACED

I love working with deco mesh. You can see evidence of ... END_OF_DOCUMENT_TOKEN_TO_BE_REPLACED

I'm going to show you how to make these adorable ... END_OF_DOCUMENT_TOKEN_TO_BE_REPLACED