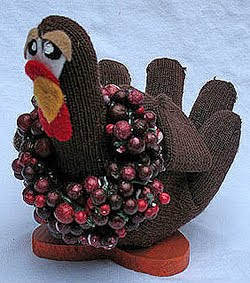 Now that Halloween has passed, I was going through some of the Thanksgiving crafts I have made over the years for FamilyCorner.com. One of my all time favorites has to be the stuffed glove turkey I made three years ago. I always keep stock of those cheap knit gloves, and usually buy gobs of them each winter. My kids go through them like water, so I always have several pairs on hand. Quite often I end up with several mismatched pairs, which I in turn I save to make something.

This brown glove, however, didn’t lose its mate. Instead, the second glove in the pair had a huge hole in it. So I salvaged some scraps from the second glove and came up with this stuffed turkey glove. I still bring him out every year at Thanksgiving and he sits proudly on our table. This is one turkey that will never hit the oven. ;) 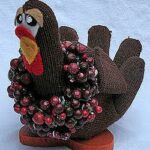 Amanda Formaro
Amanda Formaro is the crafty, entrepreneurial mother of four children. She loves to bake, cook, make kid's crafts and create decorative items for her home. She is a crafting expert and guru in the kitchen and has appeared online and in print publications many times over the years. She is also the editor for the Home & Garden channel at Craft Gossip and owner of FunFamilyCrafts.com.
Latest posts by Amanda Formaro (see all)
18shares
« Halloween Felt Ghouls: Last Minute Easy Craft
Thanksgiving Tree Craft for Kids » 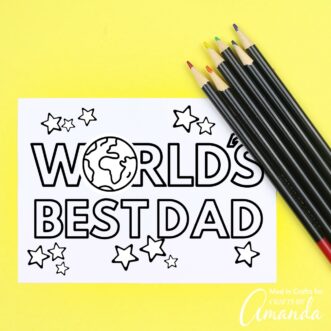 All images and text copyright Amanda Formaro 2020. For the purposes of featuring a post from Crafts by Amanda, you may use one photo that must be credited and linked back to the appropriate post on this blog. Please do NOT copy and paste anything from this website as it constitutes a violation of the AF/AC copyright.